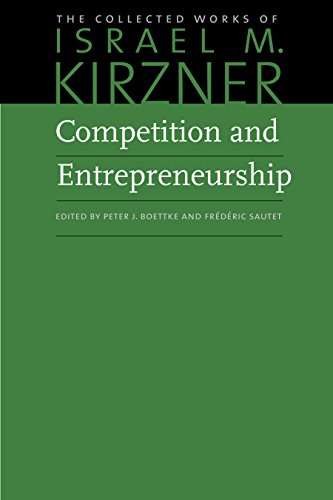 No other economist in recent times has been so closely identified with the Austrian School of economics as Israel M. Kirzner, professor emeritus of economics at New York University. A leader of the generation of Austrian economists after Ludwig von Mises and F. A. Hayek, Kirzner has been recognized as one of the minds behind the revival of entrepreneurship and market process theory in the twentieth century.

Competition and Entrepreneurship defines Israel M. Kirzner’s unique contribution to the economics profession. Pointing out the shortcomings of the traditional microeconomic model, Kirzner offers an alternative and complementary view, which illuminates and enriches the way economists think of the market process.

Recognizing that economics cannot explain sheer novelty and ultimately social change by referring only to productive factors already in use, Kirzner develops a theory of the market process that focuses on the role of the pure entrepreneurial element in human action. This leads him to reconstruct the theory of price in order to understand, as he puts it, “how the decisions of individual participants in the market interact to generate the market forces which compel changes in prices, outputs, and methods of production and in the allocation of resources.”

In doing so, Kirzner offers a new appraisal of competition moving the entrepreneurial function back to center stage, thereby shedding new light on issues such as monopoly pricing, cartels, and pure profit.

Israel M. Kirzner is a leading economist in the Austrian School and Emeritus Professor of economics at New York University.

Peter J. Boettke is University Professor of Economics and Philosophy at George Mason University and the BB&T Professor for the Study of Capitalism at the Mercatus Center. His publications include Calculation and Coordination and Living Economics. Since 1998 he has been the editor of the Review of Austrian Economics.

Frédéric Sautet is a visiting associate professor of economics at the Catholic University of America. Previously, he has taught at George Mason University, New York University, and the University of Paris Dauphine. He is the author of An Entrepreneurial Theory of the Firm and has published widely on entrepreneurship.