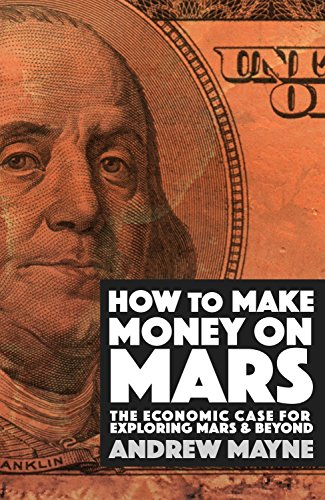 Once a far off dream, colonizing Mars is a very real possibility with the announcement of SpaceX’s plan to get humans there in the next decade. But how do you pay for it? What are the economic benefits? Why haven’t we done it before?

The answers might astound and surprise you as Mayne explains that colonizing Mars could lead to the biggest economic boom in history. Looking beyond Mars as a tourist destination or temporary source of novelty and treating Mars as a technology problem could usher in an age of innovation even greater than the microprocessor or the Internet.

It’s not one thing or a single spin-off tech that will create trillions of dollars of new wealth; it’ll be the thousands of solutions and companies created as private capital and the technology industry focuses on the new age of human exploration.

In How to Make Money on Mars, Mayne breaks down the different stages of economic opportunity using historical precedents and explains how to fund the first mission to ultimately turning Mars into the technology center of the Solar System.

He illustrates the potential shortcomings of a Martian economy based primarily on tourism or resource exploitation and why it’s not necessary to find some single justifiable material or discovery that justifies exploration and how finding one could actually be counterproductive to overall Martian economic development.

Topics covered include:
Paying for Mars
Martian start-ups
Martian pharmaceutical technology
Biotech on a dead planet
Martian money
Mars as a brand
How to be a Martian while living on Earth

The biggest challenge in understanding the economic potential of Mars has been that the problem was previously primarily addressed by scientists and science fiction writers examining the problem from a purely academic perspective or imagining some far future version of Mars disconnected from present day, drawing parallels to history that were too on the nose and didn’t address our changing economy. Martian economics approaches Mars as an economic opportunity, focusing on return on investment and emerging technologies.

Andrew Mayne has been talking and writing about space economics for years through his books and award-winning science podcast. He helped develop an experiment performed onboard the International Space Station and has consulted on several space technology projects.