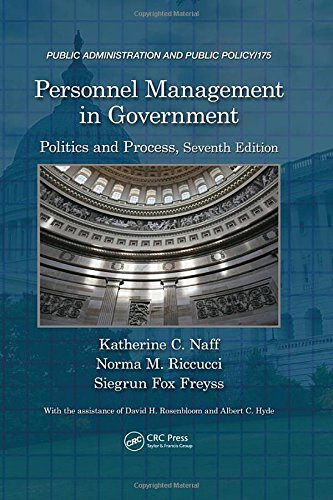 With over 20 million people on its payroll, the government continues to be the largest employer in the country. Managing people who do the nation’s work is of critical importance to politicians and government leaders as well as citizens. The great recession of 2008 put enormous strains on governments, highlighting the key role personnel play in managing under times of austerity as well as prosperity.

A thorough examination of political and historical aspects, Personnel Management in Government: Politics and Process, Seventh Edition provides students with a comprehensive understanding of human resource management within its historical and political context in the public sector. It discusses the development of public sector human resource management, the present status of best practices, and important insights from current scholarship on all three levels of government: federal, state, and local.

During the 36 years since the publication of the first edition, the authors have addressed issues that were not yet considered mainstream, yet have become so over time. The seventh edition is no different. It examines progress that public personnel professionals are making to address changes in the political, legal, and managerial environment of the current decade. Exploring developments and innovations in the management of people who carry out the government’s work, the book introduces students to public sector personnel management.